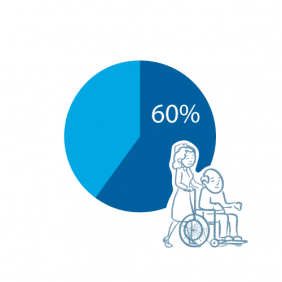 Alzheimer's disease is responsible for about 60% of these.

The disease is named after the doctor Alois Alzheimer, who lived from 1864-1915. He described the changes in the brain of a patient whose brain showed characteristic changes. 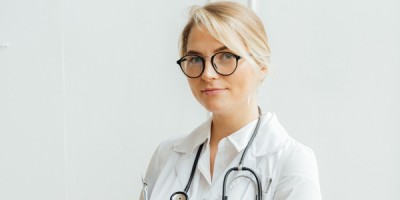 What is the difference between Alzheimer's and Dementia?

Dementia is initially a collective term for around 50 diseases. These are neurological and neurophysiological diseases that reduce mental abilities. Alzheimer's disease, on the other hand, is a specific form of dementia and, at around 60%, is the most common of all forms of dementia. Other well-known dementia diseases would be vascular dementia, Lewy body dementia, and frontal temporal dementia.

The real question would therefore be what differences exist between the two most common forms of dementia.

Although Alzheimer's and dementia show almost the same effects, they arise from different causes. While Alzheimer's disease is caused by the loss of nerve cells and brain tissue, dementia occurs as a result of brain damage caused by circulatory disorders. The effects and symptoms are largely the same. However, vascular dementia is often accompanied by paralysis and numbness.

Where does Alzheimer's come from?

Alzheimer's dementia is considered to be the most common form of dementia. It is a neurodegenerative disease that describes the increasing loss of nerve cells. The brain shrinks by up to 20%. At the same time, the patients mentally deteriorate because the transmission of signals in the brain is made more difficult. As a result, personality and social behavior change, and speech disorders occur.

Despite great progress, the causes of Alzheimer's have not yet been fully researched. However, it has been shown that plaques and fibrils cause small changes in the brain. These are deposits of beta-amyloid outside the nerve cells (plaques) and bundled deposits inside the cells (fibrils). These internal deposits are made up of tau proteins. However, whether they are the cause or a consequence of Alzheimer's has not been proven. If there is also a disturbance in the blood flow to the brain, vascular dementia occurs. The symptoms of Alzheimer's are often stronger and can be felt earlier than in the case of Alzheimer's dementia alone.

Is there a test to diagnose Alzheimer's?

Alzheimer's disease can only be diagnosed when symptoms have appeared. A suspicion of Alzheimer's can be checked with psychometric tests as well as laboratory diagnostics, imaging methods, or CSF diagnostics. These include an electroencephalogram (EEG), a computer tomogram (CT), a nuclear spin tomogram/magnetic resonance imaging (MRT), and positron emission tomography (PET) or single photon emission computer tomography (SPECT).

The most common cause of death in advanced dementia is the sequelae or complications of the disease. Patients in an advanced stage suffer from immobilization, making the life expectancy of dementia patients dependent on care. People with Alzheimer's become more susceptible to infectious diseases due to a lack of self-sufficiency and mobility. Due to immobilization, the most common cause of death is pneumonia. 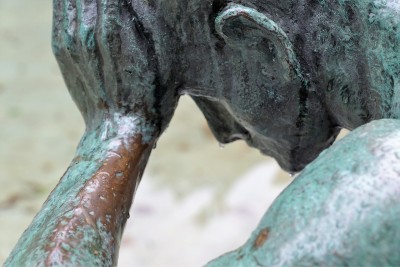 Those affected appear physically weaker and less mobile. They may only be out of bed for a short time and only be able to sit in a chair or recliner for short periods of time. However, cerebral seizures or dysphagia (aspiration pneumonia) can also occur in advanced stages.

Difficulty swallowing can increase as the disease progresses, causing people to choke more often than usual. The saliva in the throat usually causes rattling breathing. Under normal circumstances, the patient would simply cough up the secretion in the throat, which is usually no longer possible due to the restricted movement.
Sucking out the secretion is painful and hardly helps, as the mucus forms again quickly. A frequent change of body position, on the other hand, is helpful to redistribute the secretion.
Interest in eating and drinking also often decreases. Due to the reduced food intake, severe weight loss or malnutrition can occur over time. These in turn increase the susceptibility to infections.

In summary, most patients do not die from Alzheimer's disease itself, but from its consequences. The most common causes of death are pneumonia.

How does Alzheimer's manifest itself?

People with Alzheimer's change their moods and personalities. They may feel confused, suspicious, depressed, anxious, or restless. They are easily disturbed and upset at home, at work, with friends, or outside of their usual environment.

If you are interested in a non-binding discussion about the treatment options for Alzheimer's, you can seek advice from doctors at the center for advanced medicine Zentrum der Erweiterten Medizin. Here you will find information on therapy with TPS for Alzheimer's.

A comprehensive collection of information on the subject of Alzheimer's can also be found on Wikipedia. Wikipedia on Alzheimer's

We use cookies to offer you a better browsing experience, personalise content and ads, to provide social media features and to analyse our traffic. Read about how you can control cookie usage by clicking Settings. You consent to our cookies if you continue to use this website.

Please choose which type of cookies you consent to:

Your cookie settings (accept or decline) will be stored on your computer to be considered during future visits to this site. You can change your settings by clicking the corresponding link on the privacy policy page.